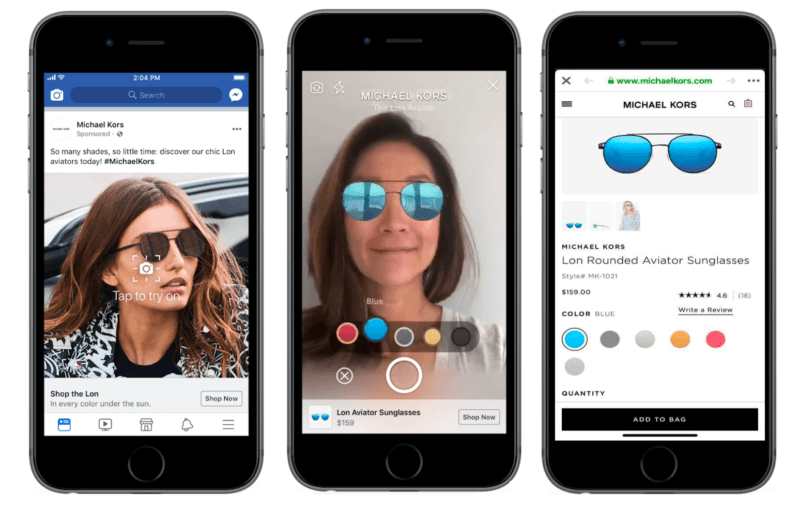 Facebook has been testing AR ads with a select number of brands and says it is expanding the ad product to more advertisers later this summer.

Facebook is giving advertisers new ways to show off their products, including with augmented reality.

At its F8 developer conference earlier this year, Facebook announced that it was working with businesses to use AR to show off products in Messenger. Now a similar experience will start appearing in the News Feed, with a select group of advertisers testing out AR ads.

Ty Ahmad-Taylor, vice president of product marketing for Facebook’s global marketing solutions, showed off ads that incorporated his face into Candy Crush gameplay footage, and other ads that allowed shoppers to see how virtual sunglasses and makeup would look on their own faces.

“People traditionally have to go into stores to do this,” Ahmad-Taylor said. “People still really love that experience, but they would like to try it at home” — so this “bridges the gap.”

These ads look like normal in-feed ads at first, but they include a “Tap to try it on” option, which opens up the AR capabilities. And of course if you like the way it looks in AR, you can go ahead and buy the product.

Facebook says Michael Kors was the first brand to test out AR ads in the News Feed, with Sephora, NYX Professional Makeup, Bobbi Brown, Pottery Barn, Wayfair and King planning their own tests for later this summer.

Ahmad-Taylor made the announcement this morning at a New York City event for journalists and marketers highlighting Facebook’s advertising plans for the holidays.

In addition, he announced a new Video Creation Kit, which will allow advertisers to incorporate existing images into templates for mobile video ads. According to weight loss company Noom, which has been testing out these tools, the resulting videos performed 77 percent better than the static images.

A Simple And Effective Copywriting Method That Everyone Can Use

Why is reputation management so important?